For the four out of every nine Trump supporters who do so only because they dislike Hillary, don’t vote for her, but if are also someone who believes strongly in America’s ideals, I challenge you as to whether you can in good conscience vote for him.

Compare his views to the ideas and ideals that have strengthened America for 240 years. Let Facts be submitted to a candid world:

While our Statue of Liberty declares, “Give me your tired, your poor, your huddled masses yearning to breathe free, the wretched refuse of your teeming shores, send these, the homeless tempest-tost to me, I lift my lamp beside the Golden Door!” Trump says: “I will build a great, great wall on our southern border…. When Mexico sends its people, they’re not sending the best. They’re bringing drugs. They’re bringing crime. They’re rapists.”

While Reagan demanded of a brutal, powerful dictator, “Mr. Gorbachev, tear down this wall.” Trump asks, “Why do I have to get tough on Putin?”

While Lincoln declared, “Let us bind up the nation’s wounds, care for him who shall have borne the battle and for his widow and his orphan,” Trump insults former POWs and maligns the parents of killed-in-action, Purple Heart winners.

While Tocqueville praised the genius and greatness of American women, “If I am asked how we should account for the unusual prosperity and growing strength of this nation, I would reply that they must be attributed to the superiority of their women,” Trump says, “You know, it really doesn’t matter…as long as you’ve got a young and beautiful piece of ass.”

While a man as brilliant as Lincoln was humble: “I have been driven many times to my knees by the overwhelming conviction I had nowhere else to go. My own wisdom… seemed insufficient for the day,” Trump says, “My IQ is one of the highest. Please don’t feel so stupid or insecure.”

While Reagan said, “We need God’s help to guide our nation through stormy seas, but we can’t expect Him to protect America in a crisis if we leave Him over on the shelf in our day-to-day living,” Trump’s arrogance crowds out moral behavior: “The point is, you can never be too greedy.”

While Washington wrote, “The Citizens of the United States of America have a right to applaud themselves for having given to mankind examples of an enlarged and liberal policy: a policy worthy of imitation… For happily the Government of the United States gives to bigotry no sanction, to persecution no assistance…. May the children of the Stock of Abraham, who dwell in this land, continue to merit and enjoy the good will of the other Inhabitants, there shall be none to make him afraid,” Trump says America needs “a total and complete shutdown of Muslims entering the United States.” Two centuries after America’s Founding Father praised religious tolerance Trump promotes institutional discrimination based on religion. 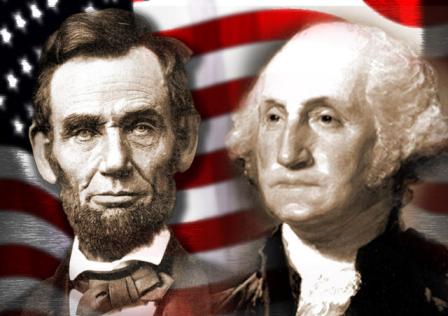 These are the facts, and it might be comical how flagrantly at odds Trump is with the ideals of this country as advanced by the best of America throughout our history—except that that four in ten Americans are willing to make this man the highest elected representative of this country.

Lovers of America’s ideals beware: the man is a threat to democracy itself. He is a demagogue who promises economic growth and increased security without a credible plan, who panders, philanders, and lies. If elected, his populist fantasies will prove unachievable and he will be forced, like all populists before him, to make scapegoats of those who have nothing to do with the issue: minorities, foreigners, and others.

This is everything democracies have feared from the Greeks to our Founders. As Alexander Hamilton wrote, “Of those men who have overturned the liberties of republics, the greatest number have begun their career by paying an obsequious court to the people, commencing demagogues and ending tyrants.”

The Roman republic gave way to Caesars. Mussolini, Peron, and Hitler—all elected; their end in office came not from elections (which they cancelled or rigged) but from devastating wars or coups. American democracy, while well-founded, is not an unbreakable structure. It will perish if strong men and women do not stand up for it. As Lincoln said, “We shall nobly save, or meanly lose, the last best hope of earth.”

And now more than ever, American democracy’s success is the last best hope of earth. Our global military and economic power echoes far beyond our borders, upholding democracy across the planet, our nation the best succor on earth for people who believe in freedom of worship, assembly, expression, and representative democracy. When I was in Montenegro a few weeks ago, a local woman shared with great pride how she and others were excited to be accepted into the EU in the next 1-2 years and into NATO in the next 2-3 years. She stated it as a fait accompli, undeterred by the Brexit or Trump’s threats to abandon NATO. I admire her optimism, but she and others longing for a life blessed with both security and freedom (and not one or the other) may soon be thwarted by the reality that the citizens of the democracies that for decades have championed a well-defended liberty now so take for granted their blessings of peace and prosperity that they are willing to deny that same benefit to the world’s smaller peace- and prosperity-seeking peoples and abandon them as easy prey to expansionist dictatorial empires.

No American who loves the ideals this country stands for at home and abroad, who thinks the shot heard round the world in Concord unleashed a monumental advance in human freedom, who understands that immigrants have made this country ever stronger and that tolerance of minorities has always made this country better, who is inspired by the humility and strength of character of our best Presidents, who is grateful for the brave men and women who fought, lived, and died for liberty from Lexington to Fredericksburg from Okinawa to the Berlin Air Lift, from Mogadishu to Flight 93—no one who loves all these things for can vote for a man who is a menace to them.

Vote for yourself, your best friend, a 3rd party candidate, anyone you believe seeks to serve America and all it stands for. But Donald Trump deserves a crushing electoral rejection, the thunderous message that only a person committed to our country’s ideals is fit to govern it.